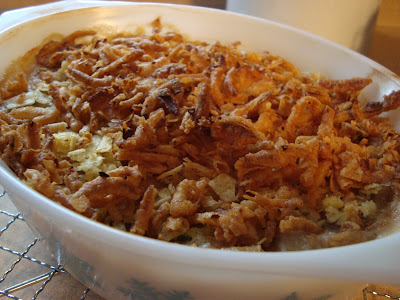 When it comes to the Caker Hall of Fame, Tuna Casserole is right up there with meatloaf, mock apple pie and the neon-green coleslaw from Kentucky Fried Chicken. But there are dozens of Tuna Casserole recipes and I’ve been suffering from performance anxiety. I couldn’t decide which recipe would be [insert echo effect] The Mother of All Tuna Casseroles…roles….roles….roles…

So when a family friend approached me recently, promising me that she had in her possession the “best tuna casserole recipe ever,” I told Carmelle to send it along and I’ve give it a whirl.

I’m thrilled to report that Carmelle’s version is not only the Mother of All Tuna Casseroles; it’s the father, the kids, the in-laws and your web-fingered third cousin. In short, it's got everything: canned vegetables, crushed potato chips, French Fried onions and a sodium content so high, you’ll be sticking your head under the bathtub faucet two hours later.

Think your tuna tops this recipe? Post it or email me at cakercooking at gmail dot com.