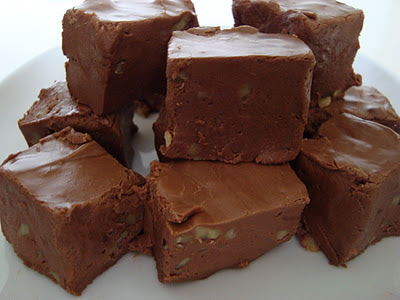 I often think of fudge as the black hole of candy. There simply isn’t any other confectionary that comes close to its sugar density. If sweetness could be quantified by weight, a cube of fudge would be so heavy, it would be impossible to pick it up. You'd have to get down on all fours and nibble on it like a rat does cheese.

But something tells me that wouldn't go over too well with the ladies at Auxiliary Branch 133.

While I don't consider fudge itself caker – although it’s about as Anglo Saxon as you can get – there’s a magical ingredient in this recipe which gives it the Caker Seal of Approval. Can you tell which one it is?

Here's a clue: if you get it in your hair while making this, you’re screwed.