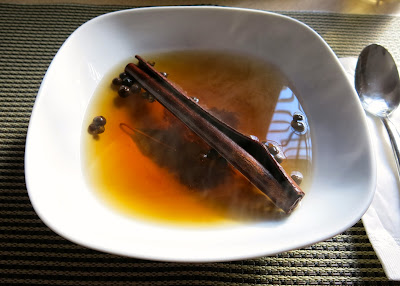 Since starting Caker Cooking in 2011, I’ve made some pretty unappetizing things. Who could forget the terribleness of “This is Terrible - The Soda is Overwhelming” Cherry Pudding or the nothingness of Cheese Snacks or the horror of Special K Meatless Roast?

Just when I thought it wasn't possible, the caker elevator plummeted another floor down.

When I saw this recipe, I figured “potpourri” was some kind of French gourmet word. And it looked easy enough to make.

Let me go on record by saying this is the worst soup I ever ate! It tasted like someone stirred it with a sweaty gym sock. The caraway seeds got caught in my teeth and the cinnamon stick was impossible to gnaw through. (I gave up after an hour and then made a dentist appointment.)

While it made my kitchen smell nice (for once), I wouldn’t recommend you make this soup. Ever. Just do yourself a favour and stick to Campbell’s cream-of-anything.

In the meantime, don't forget to check out the crap treasures I've scored so far during Bazaar-o-Rama. Click here or click the upper right hand tab. I'll update the page this Friday with my final haul.

Bring 4 cups of water to a boil. Add above ingredients and boil 5-10 minutes. Simmer as long as desired. Add water as necessary. Refrigerate and reuse.

Email ThisBlogThis!Share to TwitterShare to FacebookShare to Pinterest
Labels: Soups