They were calling for an ice storm the night of my Caker Christmas party, my annual shindig where I invite my Italian in-laws and friends to make caker dishes. Either my guests don’t watch The Weather Network or they love caker food too much. It was a full house. In fact, many felt this was one of the tastiest Caker Christmases ever. Which really isn’t saying much.

Anyways, I’m having a hard time typing on account of my sodium-swollen fingers, so please excuse any typpos.

Come journey through a landscape of beige – otherwise known as the Caker Christmas spread. 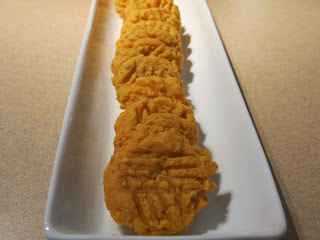 Imperial Cheese Cookies
This recipe is one of the most searched recipes on my blog. These savoury cookies didn’t win over any Italian fans, though. I think Italians struggle with the idea of eating cookies as appetizers. Thankfully, I don't share that struggle.

The recipe is here. I added an extra cup of Rice Krispies on the advice of a Caker Cooking reader. 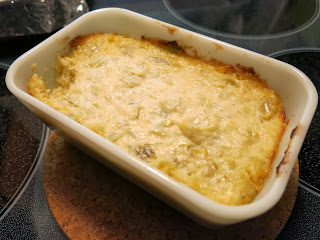 Artichoke Dip
I was told by an Italian guest that this wasn’t a caker dish. “What’s not caker about it?" I asked. “There are three ingredients.” This dip was delicious, so I have suspicions that some Italians consider any food that tastes good “non-caker.” 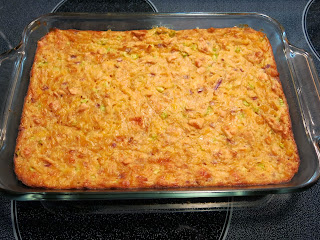 Corn Casserole
Many Italians were surprised by how much they liked this, but I wasn’t. Hello?!? It has creamed corn. Which, in some caker circles, is also known as “crack corn.” This had a nice, subtle sweetness.

To begin, preheat your oven to 325 degrees. Grease a 2-quart baking dish or shallow casserole dish, and set it aside. In a mixing bowl, combine all of the ingredients, reserving half of the paprika. Pour all of it into the baking dish. Sprinkle the remaining paprika over the top. Bake for about 1 hour, or until golden on top, and the centre is firm, no longer jiggly. 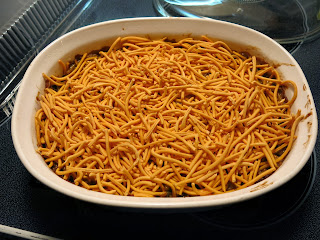 Chinese Food Casserole
Shout out to China! This dish, made by yours truly, was voted “Worst Tasting Dish” of the night. Whatever. We cakers have thick skin. BTW – this called for three cans of soup. I used only two. Even I have my limits.

Prepare rice and set aside. Brown meat and set aside. Fry celery and onion. Mix all ingredients together except noodles. Place in large casserole and top with noodles. Bake in oven at 350° for 1 hour. 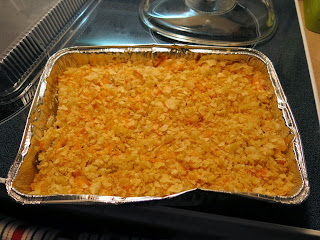 Stir together well the diced onion, sour cream or yogurt, grated cheese, thinly sliced butter, and Cream of Chicken soup. Add the hash browns and mix well. Spread this mixture evenly in a casserole dish and top with crushed chips or corn flakes. Bake at 350° 1 to 1 1/2 hours.

Source: Something called the “internet.” 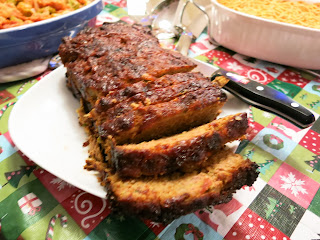 Mexican Meatloaf
Shout out to Mexico! If you’ve ever wondered what the secret ingredient is in a Mexican meatloaf, it’s nacho chips. Oh, and brown sugar. Sorry the picture is a little blurry. I was a little drunk distracted. 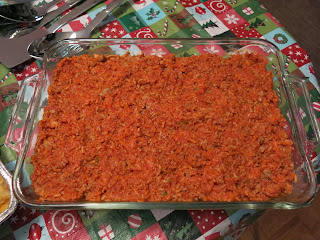 Spanish Rice Casserole
Shout out to Spain! This recipe called for canned tomatoes. The woman who made it used homemade tomato sauce instead (hence the colour.) When her mother saw this, she said, “You’re wasting good sauce in that?” Everyone's a critic.

Saute onion in greased frying pan. Add hamburger and brown. Add uncooked rice and tomatoes. Salt and pepper to taste. Cover and simmer one hour, stirring occasionally. May be made ahead of time. Put in casserole dish and reheat at 350. 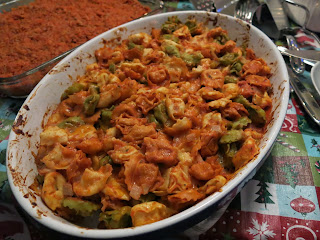 Tortellini Casserole
Shout out to Italy! The chicken coop was squawking over this one. “How can this be caker? There’s tortellini in it!” I pointed out the tortellini was covered with cheddar cheese. That seemed to shut everyone up.

Melt butter in large saucepan; add garlic and onion. Cook until tender. Sprinkle with flour and cook 3-4 minutes – do not brown. Whisk in milk and bring to a boil. Add tomatoes, herbs, salt and pepper. Cook 15 minutes. Meanwhile, cook tortellini in boiling salted water for 13 minutes. Drain well. Combine tortellini mixture with sauce. Add cheese and transfer to a 3 quart baking dish. Sprinkle with grated Parmesan cheese. Bake at 350 for 30 minutes until hot and brown. 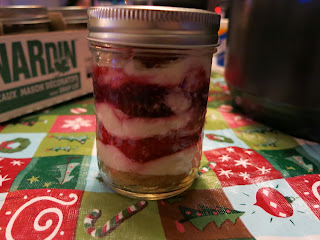 No-Bake Raspberry Cheesecake Pots
These were delicious! Only downside? You have to go out and buy the jars. I say forget that and just use your leftover soup cans. Make sure you wash them out first. Cheesecake + grey bits of mushrooms = bad holiday season.

Using an electric mixer, beat the cream cheese and sugar until smooth. Reduce the mixer speed to low and gradually add the heavy cream. Increase the speed to high and beat until thick and stiff, about 2 minutes. Beat in lemon juice. Spoon graham cracker crumbs into the jars. Top with cheesecake batter, raspberries and jam, alternating red layers with cheesecake batter. Refrigerate at least 2 hours before serving. 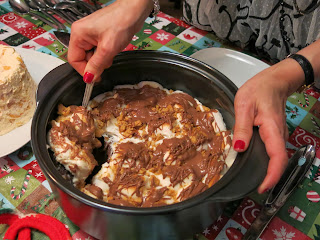 S’mores Cake
This party guest said she got the recipe when she bought her slow cooker. I don’t have the recipe, but it looks like you bake a cake in a slow cooker (Why would anyone want to bake a cake as slowly as possible?), toss some marshmallows and graham crackers on top and drizzle with melted chocolate. I had s’more for breakfast. 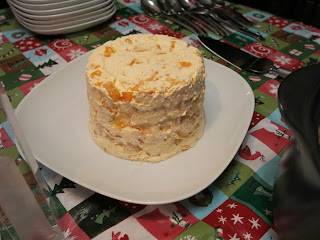 Cool Whip Melba
You make this and then use the container as the mold. If there’s a better example of caker resourcefulness, I’d like to see it. Many people found this “tastefully refreshing.”

And that’s it!
Another Caker Christmas has come and gone. (Although, for most, it keeps repeating the day after.) Come back next Monday, December 29 when I post my best – and worst – recipes of 2013. 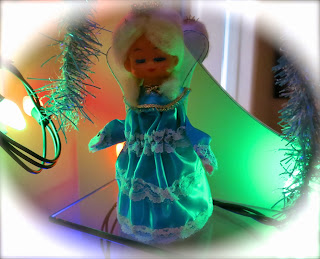 From my garishly-decorated house to yours, all the best for the holiday season!