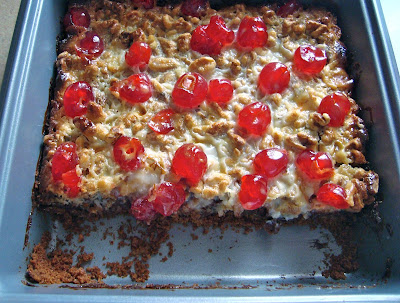 When you think of epic romances, a number of couples come to mind: Romeo and Juliet, Liz and Dick, Kim Kardashian and Kim Kardashian. But no duo comes close to the red hot flame shared between cakers and Hello Dollies squares.

Give us some graham cracker crumbs, a bag of chocolate chips, a handful of shredded coconut and a 9”x13” pan, and you’ll see passion that makes Paula Deen’s love for taters seem like small potatoes.

A commenter recently asked if I had a good Hello Dollies recipe. I have several, including the one featured below. Grab your walnuts and melted margarine, dim the lights and put on the Kenny G. It’s time to make some caker lovin'.

Pour 1 can Eagle Brand milk over all. Bake at 350 for 20-30 minutes until lightly browned.

Note: I like ‘em thick, so I made mine in a 8”x8” pan and baked for about 5 minutes longer. I also put the pan under the broiler for a few minutes to get the top nice and golden. Oh, yeah.

Update: I just made these again (2 years after posting the recipe) and realized I made a typo. It's only 1/4 cup of butter in the crust. I'd typed a 1/2 cup. Apologies for screwing up anyone's Dollies!

Source: From the Lakeshore Ladies Kitchens