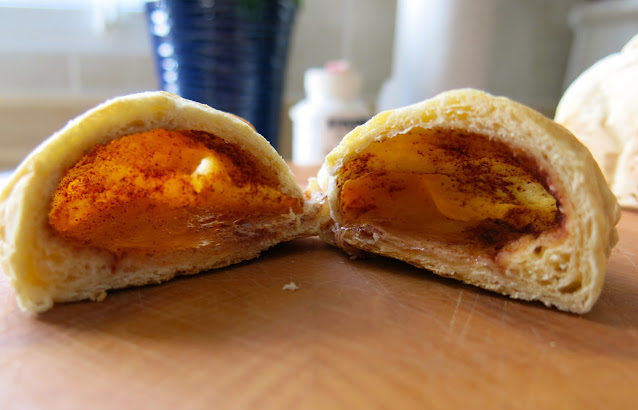 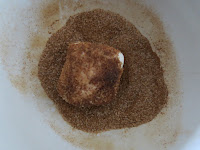 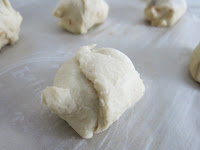 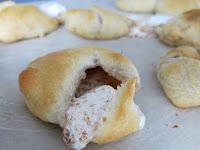 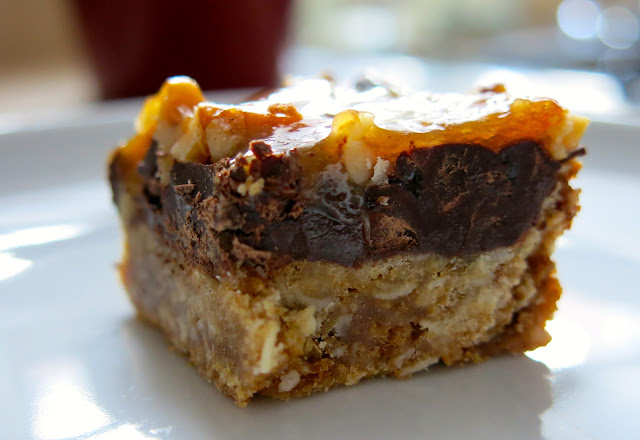 Some of you may remember my sister Sue and her Sue’s Tuna Burgers™. My sister is a gold mine for caker recipes, including one of my favourites, Taco Salad, which combines ground beef, iceberg lettuce and crushed Doritos. I haven’t posted that one yet because you need to make it for a crowd and I don’t have many friends.

These Carmelitas grace Sue’s Christmas Eve platter every year, alongside wedges of cookie pizza, macaroons and butter tart squares. But they’re too good to save only for Christmas. And since they have oats, they’re healthy enough to enjoy all year long.

Remember that pretty cousin who used to visit every summer? The tanned one in short shorts who'd toss her long, shiny hair around? I think that’s how a Hello Dolly square must feel next to a Carmelita. They both come from the same gene pool, but Carmelita has a gooey, sophisticated glamour that leaves Dolly feeling like a chunky, zit-splattered wallflower in gauchos and a neck brace.

Anyways, enough about me. Just make sure you make these because they’re ridiculously delicious. Speaking of delicious – I’ve got an extra special caker Easter treat lined up for next week. Be sure to check back. I promise you won't believe your eyes.

Source: handwritten recipe card
As far as the time frame for the card, all I have to say is, "Zig-a-zig-ah!"

Battle of the Banana Breads: Caker vs. Hoity Toity

I recently came across two recipes for chocolate marble banana bread. One was a caker recipe from Kraft and used Miracle Whip. The other was a hoity toity recipe with more words than the latest issue of Reader's Digest. I made both and hosted a blind taste test among some co-workers to see which loaf would reign supreme.

I’m happy (but not surprised) to report that the caker version was the hands-down winner, getting ten votes compared to the hoity toity loaf’s two votes. People found the caker banana bread moister with more flavour. (Uh, it has Miracle Whip. Hel-lo!?) A few Grey Poupon types preferred the gourmet one, claiming the “crumb” was better. (I don’t even know what that means.)

Suffice to say, the folks at Kraft will be over the moon when they catch wind of this. The Thurston Howells of the world? Not so much.

A word of warning to my fellow cakers: Do NOT attempt the hoity toity recipe. It took 40 minutes to make (as opposed to 20 minutes for the caker version), I had to use more than one bowl and there are words I didn't understand, like “fine-mesh strainer” and “Dutch process” and “food processor.” By the time I finished, I had a real bad headache and lost a chunk of my life I'll never get back. Just do yourself a favour and stick to the caker version. 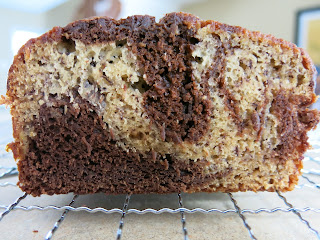 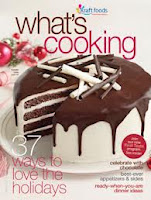 Thanks for passing it along, Morag! 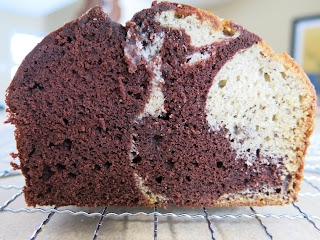 Preheat the oven to 350˚ and position an oven rack in the center. Lightly coat a (9x5) loaf pan with melted butter or high-heat canola-oil spray and line it with a piece of parchment paper that extends 1 inch beyond the long edge of both sides of the pan. Peel the bananas and place them in the bowl of a food processor. Process to a smooth puree. (Alternately, mash them in a bowl using a fork.) Measure out 1 cup of the puree and transfer to a medium bowl, discarding the rest of the puree or saving it for another use. Add the buttermilk and vanilla and whisk until just blended. Set aside.

Use a fine-mesh strainer to sift the cake flour, baking soda and baking powder together in a medium bowl. Whisk to blend well. Set aside. Place the cocoa powder in a small bowl. Pour the boiling water over the cocoa and stir until it forms a smooth paste—it should run thickly off the spoon. If it is too thick, add another tablespoon of boiling water and stir again. Set aside.

With the mixer running on the lowest speed, add one-third of the flour mixture. Just as it is barely blended and you can still see a few patches of flour, add half the banana mixture. Repeat with the remaining flour and banana mixtures ending with the flour. Scrape down the bowl and finish blending the batter by hand.

[Editor's note: You still with me or have you dozed off by this point?]

Transfer half of the batter to the second medium bowl. Add the cocoa paste and, using a rubber spatula, gently but thoroughly blend it into the batter.

Drop alternating spoonfuls of dark and light batters into the prepared pan, then marbleize by using a spoon to gently turn the batter over in 3 places down the length of the pan.

Bake the banana bread for 55 to 65 minutes, until firm to the touch and a toothpick inserted into the centre of the loaf comes out clean. Transfer to a rack to cool completely. When cool, remove from the pan, peel off the parchment paper, and cut slices by sawing gently with a serrated knife. 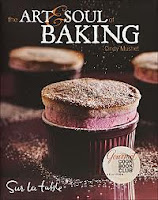 Source: The Art and Soul of Baking

Email ThisBlogThis!Share to TwitterShare to FacebookShare to Pinterest
Labels: Bread and Loaves 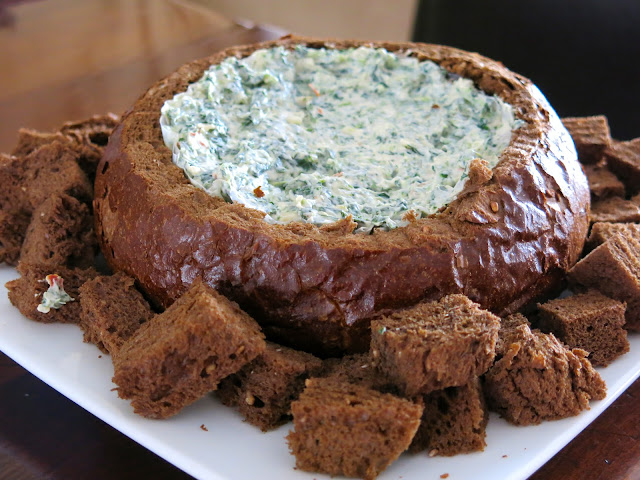 I’m kind of blue that Caker Cooking reader month has come its end. I learned so many things – that stale donuts taste better with ice cream, that wieners rolled in corn flakes taste like pogo dogs and that Tootsie Rolls make great cat turds. I'm a better caker, thanks to all of you.

Speaking of cakers, if there's one thing we hate more than nutrition, it's doing dishes. How else can you explain the pride we take in our one-dish recipes? This Spinach Dip is the ultimate caker fantasy – not only are there no dishes to wash, you actually EAT the dish! Cakers haven’t been this revved up since Taco Bell introduced Taco Salad.

Made with pumpernickel loaf, Spinach Dip is a staple of caker cocktail parties, baby showers and pretty much any lonely weeknight. It’s one of the rare instances where cakers allow themselves to venture beyond white bread. Just make sure you buy the chopped frozen spinach and not whole frozen spinach. A friend of mine made that mistake once and everyone had pieces of spinach dangling down the back of their throats for the rest of the evening. Ever been around a cat trying to get rid of a hairball?