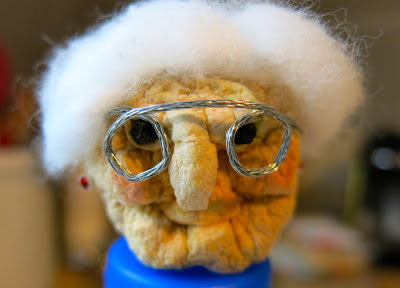 Hello, internet people. I'm Mildred. The caker fellow asked me if I'd host his Apple Head Doll contest because he's too busy cooking something grey.

Below you'll find some new friends of mine and it's up to YOU to pick the winner. Voting will close next Sunday, November 4 and the winner will be announced on Monday, November 5.

The grand prize winner will receive a delicious collection of cookbooks from Random House Canada.

In the top right corner of the blog, you'll see a list of the apple head doll names. Simply vote for your favourite. You can vote as many times as you like and also for more than one apple head doll.

May the best head win! I'm off to have a piece of Gumdrop Cake. 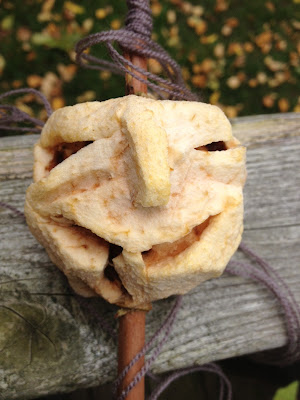 1) Honey Boo Boo
Note from the apple artiste: Mine is called Honey Boo Boo because it was made from a honey crisp apple and it sucked. 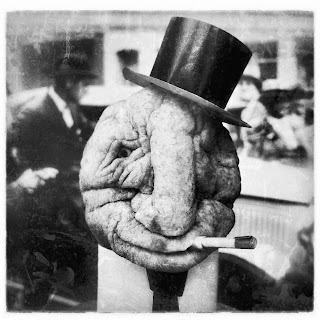 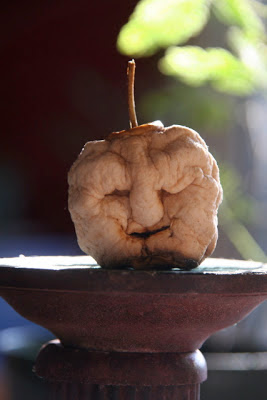 3) Monsieur Pépin
Note from the apple artiste: This is his mug shot after a particularly long afternoon at the café. He's tired and a little achy. But he's still sporting his beret. 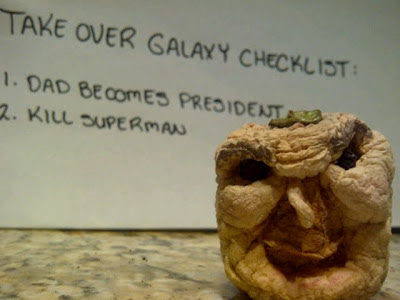 4) Josh Romney
Note from the apple artiste: To see the real one, click here. 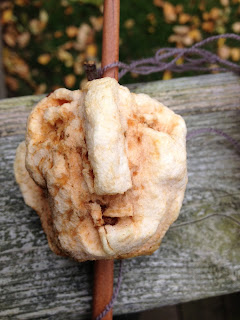 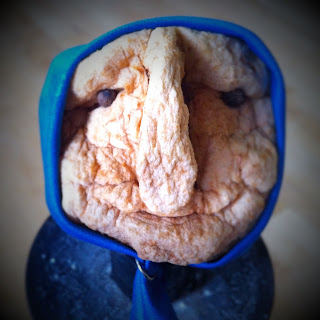 6) Maroushka
Note from the apple artiste: She has something of the gypsy about her, so I think her name is appropriate. 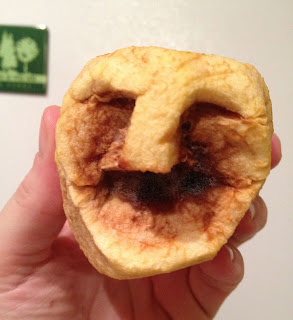 7) Mr. Smith
Note from the apple artiste: In an attempt to speed up the drying process, I used my oven, on low heat. It seemed to be working until my betrothed turned on the oven to make chicken fingers and ended up baking my apple head.

The grand prize winner will receive the following books: 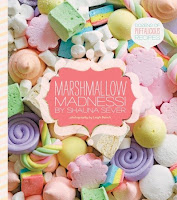 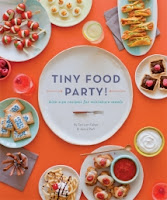 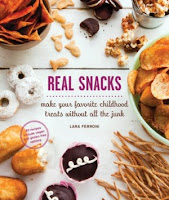 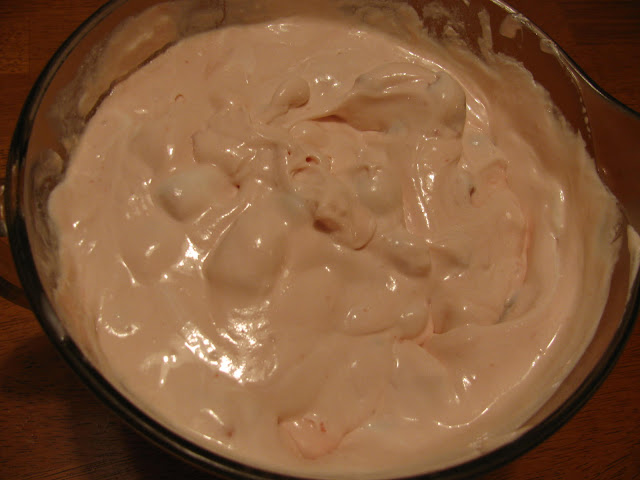 Awhile back, I gave Caker Cooking readers the chance to win a copy of my novel, Natural Order, along with a handwritten caker recipe. I had two a lot of entries and fellow blogger Mimi was one of the winners. The recipe I selected for her was called "Pink Thing."

Mimi, being the good sport she is, recently made Pink Thing and posted the recipe and results on her own blog, 1972: The Retro WW Experiment. I think Mimi will agree with me when I say there's nothing better than a good serving of Pink Thing.

In addition to Mimi’s post, another blogger, Lisa, posted the results of her own caker cooking experiment on her blog, Beyond the Fringes. She made something called "Green Cake" which doesn't look like much of a cake, but at least it's green. Or sea foamy.

Speaking of contests, check out Caker Cooking on Monday when the finalists in my first-ever Apple Head competition are revealed! The winner will be decided by YOU, so don’t forget to cast your vote. And let me tell you – based on the entries I've received so far, the competition is going to be fierce. 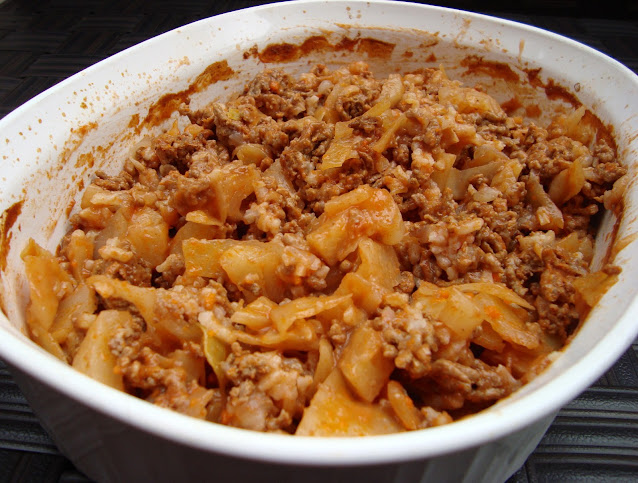 Good lord, cabbage stinks. I don’t care if it’s fried, pickled or boiled, the only thing more heinous than the smell of cabbage is the labour that goes into making cabbage rolls. Don’t get me wrong – I love cabbage rolls just as much as the next caker.  But I’m a busy person. I have cereal box mazes to complete and artificial ferns to dust and jazzercise class once a month, etcetera, etcetera.  I’m lucky if I find the time to celebrate the moments of my life with a cup of General Foods International Coffee Sugar-Free Suisse Mocha.

That’s why this casserole is a godsend for cakers like me. It combines all the taste of cabbage rolls with absolutely none of the work. (If you’re feeling a little too lazy, you can toss in a toothpick or two so your guests have something to accidentally pierce their upper palates with.)

I made this for my mom awhile back and she raved about it. (Of course, this is also a woman who has pepper in her shaker that’s older than me.) Serve with a dollop of sour cream and you’re in cabbage roll heaven. Just leave the windows open. 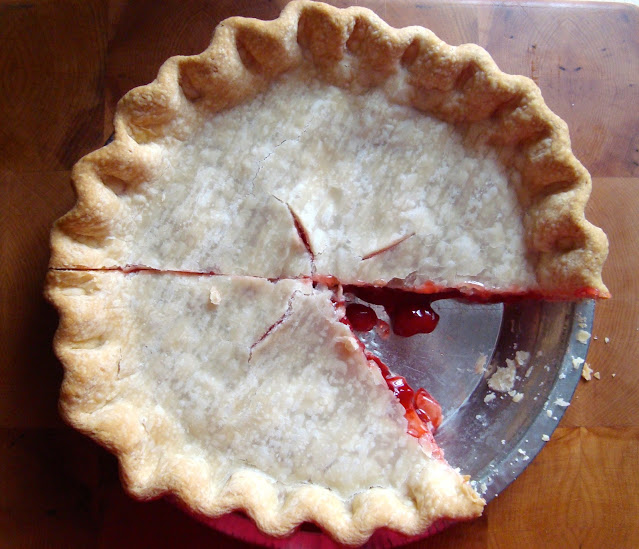 Let’s face it – we cakers are a deceitful bunch. In my third instalment of Writers Cooking Caker, Helen Wainman recounts a story about an elderly caker (they’re the worst ones) who managed to fool the entire world. Okay. Maybe just a television producer.

Many years ago, I produced features for a morning TV show. We were always on the lookout for entertaining, heart-warming stories and heard of an elderly woman who lived in one of the small communities surrounding Lake Erie. We were told she was an elderly widow who spent her time making homemade pies for all the truck stops that lined Highway 401.

How much more heartwarming can you get? So we set off one morning to do the story. We arrived at her apartment and she was as sweet as we expected. We entered the apartment, expecting to see flour on the counters, bowls full of dough, pots on the stove bubbling with fruits ready to scoop into pie shells. But there was no evidence of any pie baking.

“Could we show you baking some pies?” I asked.

“Is that what you want, dear?”

She then opened a freezer adjacent to her counter and pulled out six aluminium containers, each one holding a brand-name frozen pie crust.

Okay. I could understand that. You can’t have everything. A ready-to-bake bottom crust would make it easier for her to make so many pies.

I continued, still hopeful: “Can we see you adding the pie filling?” I was convinced I would finally see homemade pie filling that had taken hours to make. She opened her cupboard doors – and all we could see were dozens and dozens of cans of E.D. Smith cherry pie filling. She grabbed several, went to her electric can opener and opened each can.

We watched as the bright red, gelatinous goo slowly eased its way out of each tin. Six cans in all. Dumped into six pie crusts. It took seconds.

By this time, the cameraman and I couldn’t look at each other. We couldn’t speak.  But I tried again.

“How do you top the pies? I hear you make lattice tops to cover them.”

Up went the freezer lid again. Out they came. Six store-bought frozen lattice tops. We were stunned. There was no visual and we didn’t have a story. “Port Stanley Pie Lady” would be a story all right but it would be told around a dinner table for years to come.  To be fair, the sweet old lady never claimed to make homemade pies. But at least we ended up with a recipe for Easy Peasy Cherry Pie.

Here's the recipe, folks. It don't get much easier than this. Thanks, Helen!

Place bottom of pie crust in pie dish. Aluminium will do. Dump pie filling in crust. Put second pie crust on top. Bake at whatever temperature pie crust people tell you to use. 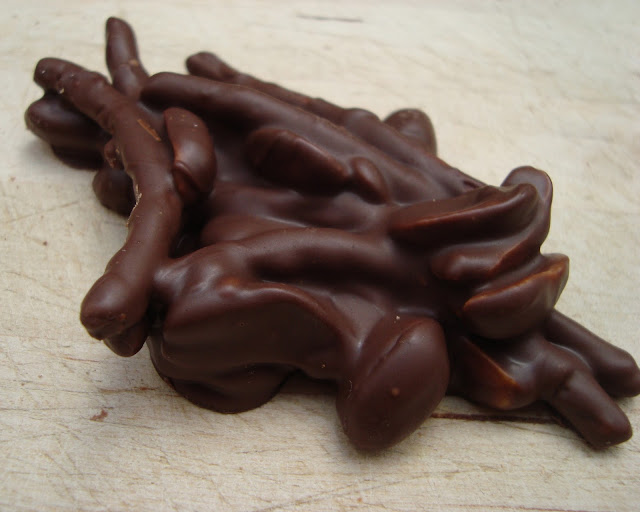 For me, there’s nothing more delightful than turning to my guests at the end of a meal and asking, "Who's up for a Painful Turd?"

As soon as the question leaves my lips, my guests practically rise out of their chairs in anticipation. (Or is that the result of broccoli backwind?) In any case, Painful Turds are as much a part of caker culture as−

Okay, okay. They’re not called Painful Turds. I made that up. They’re really called Chow Mein Noodles Chipit Crunchies. But my name is just so much more…visually appropriate, don’t you think?

Don’t let appearances fool you, though. These delicious drops have been a popular fixture at caker bake sales for years. And they're as easy to make as JELL-O. Just make sure you use the crunchy chow mein noodles and not the soft kind. After all, no one likes a soggy turd.

Melt chocolate and butterscotch chips slowly in pan. Stir, then add noodles and peanuts. Mix thoroughly, then drop by spoonful on waxed paper. Chill, then pack in sealed container. 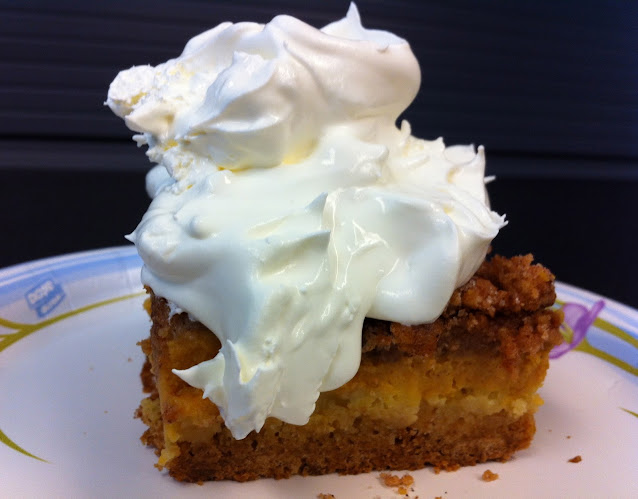 Thanksgiving is a special time for cakers. We gather round our kitchen tables, join hands and give God thanks for the many blessings in our lives, including Kraft Thousand Island dressing, Bee Hive corn syrup and Duncan Hines cake mix.

Unlike most people, cakers don’t stop at making only cake with cake mix. We’re far too resourceful for that. We use it as a dessert topping, as a secret ingredient in cookies and some of us even use it as an effective scouring powder for cleaning bathroom grout.

This Pumpkin Dessert – which dates back further in caker history than our love of Hee Haw – offers the best of both worlds by using cake mix for the topping and the crust. Serve it with a side of Cool Whip and you’ll be in pilgrim heaven. If the pilgrims had cake mix. Which they didn’t. Because it hadn’t been invented. But they would’ve. If they'd had've had it.

Ow. That last one hurt my brain real bad.

In a large mixing bowl, combine the cake mix, butter and one egg until crumbly. Set aside 2/3 cup for topping. Press the remaining crumb mixture into a greased 9” x 13” baking pan. In a mixing bowl, beat the remaining eggs. Add pie mix and milk and pour over crust. Combine the sugar, flour, cinnamon and reserved crumb mixture, sprinkle over the pumpkin layer. Bake at 350° for 45-50 minutes or until top is golden brown. Cool on a wire rack for 1 hour. Refrigerate for 2 hours or until chilled before cutting. 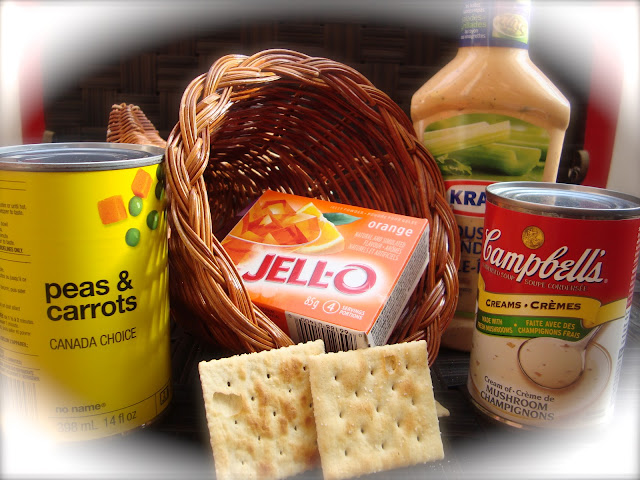 We here in Canada are celebrating Thanksgiving on Monday (Sorry, Americans. You'll have to wait another few weeks.) I'm taking a few minutes away from my busy Thanksgiving schedule (which includes making turkey drawings in the shape of my hand) to wish you all the cakerest of Thanksgivings.

Watch for Monday's post when I'll share my recipe for the caker classic, Pumpkin Dessert. In the meantime, feel free to check out my apple head doll, now in its third, creepy week.

"This is Terrible - the Soda is Overwhelming!" Cherry Pudding

Every now and then, I find handwritten comments in the margins of my cookbooks. Usually, these comments are positive, since cakers are pretty easy to please. After all, if most of your recipes start with “Empty contents of can,” your culinary arrow ain’t pointing high. Up until recently, I’d never come across a negative comment.

Then I found this recipe for Cherry Pudding in the London Newcomers’ Cook Book. “This is terrible," the handwriting screamed. “The soda is overwhelming!”

Naturally, my caker curiosity got the better of me. The comment was a little harsh. A teaspoon of baking soda didn’t seem like an “overwhelming” amount. So was Cherry Pudding really that bad?

I’ve eaten a lot of crap in my day, but this was among the crappiest. It was dry and crunchy. Plus, I was so overwhelmed by the baking soda, I passed out on the kitchen floor and woke up the next day. I wondered if an ingredient got omitted, but the recipe says “it's very dry.” So who knows? If anyone has a theory, let me know.

In the meantime, I’m adding my own comment to the page: “Tell it like it is, caker sister!”

To see some of the things I've found inside my cookbooks, check out the new Between the Pages section.

Note: I couldn’t find frozen cherries, so I used cranberries instead. Not that it matters. Please don’t make this. Ever.

Here's the page. This woman speaks the goddamned truth.