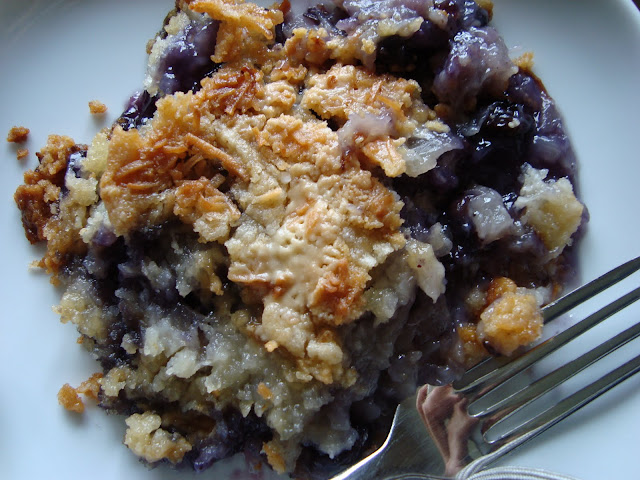 Cakers don’t always think things through. Too often, we get caught up in the excitement of craft-making and fail to consider the consequences of our actions.

I don’t know who invented Dump Cake, but I wish I could travel back in time to that historical caker moment (I’m envisioning an avocado-green fridge, ruffled curtains and a giant wooden fork-and-spoon set hanging on the wall) and ask this person: “Are you sure you want to call it that?”

What’s important here is the finished product. And when it comes to ease, taste and presentation, you’d be hard pressed to find anything more satisfying than a good Dump.

Source: "Let's Break Bread Together," The United Churches in Canada

I wrote an article about this blog for the National Post. You can read it here.
Posted by Brian Francis at 09:47 0 comments 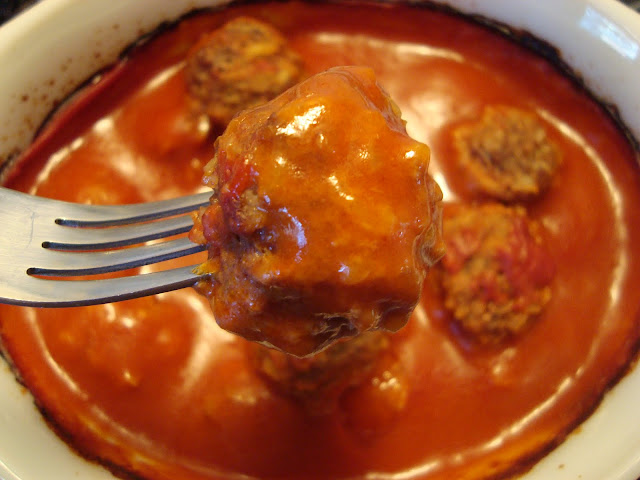 If any of you have noticed the side bar on the lower right margin of this blog, you’ll see that, in addition serving up the wacky world of caker food, I also write novels. My new book, Natural Order, comes out this week. And what better way to celebrate than with this caker classic? In fact, Porcupine Meatballs are featured in one of the scenes in the novel. Talk about life imitating art imitating life imitating art!

Before you ask, no porcupines were harmed in the making of these balls. It's hard enough for cakers to find the energy to take the plastic wrap off our food, let alone de-quill an animal. I mean, get real.

One word of caution: these are some strong smelling balls. You may need to Febreeze your curtains afterwards. And your couch cushions. And your hair.

Heat over to 400°. Mix all ingredients (except soup) and shape into balls. Place in casserole dish. Pour tomato soup over top. Bake uncovered for 35 minutes. Cover and bake for 30 minutes more.

Source: CKOM 1250 on Your Dial in Saskatoon. Sadly, it's coverless, but here's the page with the recipe. Any bets on whether Nesbitt's Service is still in business
Posted by Brian Francis at 03:46 9 comments 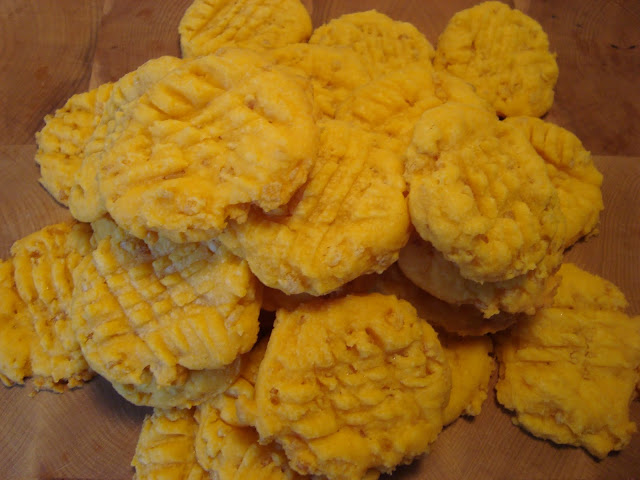 If you suffer from high cholesterol, PLEASE LEAVE THIS PAGE IMMEDIATELY.

Allow me to introduce you to these butter-rich Imperial Cheese Cookies. These savoury delicacies stake their claim somewhere between Cheddar Ritz crackers and Nabisco Cheese Nips.

For those of you unfamiliar with Imperial Cheese, it’s like hoity toity Cheez Whiz. Most cakers reserve it for dinner parties, along with Nuts n’ Bolts, Blue Curacao and napkins with sayings like “We don’t Swim in your Toilet, so don’t Pee in our Pool.”

You can find Imperial Cheese with all the other spreadable cheeses at your local grocery store. It’s the red container giving the box of Velveeta an inferiority complex.

Heat oven to 350°. Cream cheese and margarine or butter. Mix in flour. Mix in Rice Krispies. Form into balls on cookie sheet. Press down with a fork. Dip fork in flour to keep from sticking. Bake for approximately 10 minutes.

Source: "Let's Break Bread Together," The United Churches in Canada
Posted by Brian Francis at 03:53 13 comments 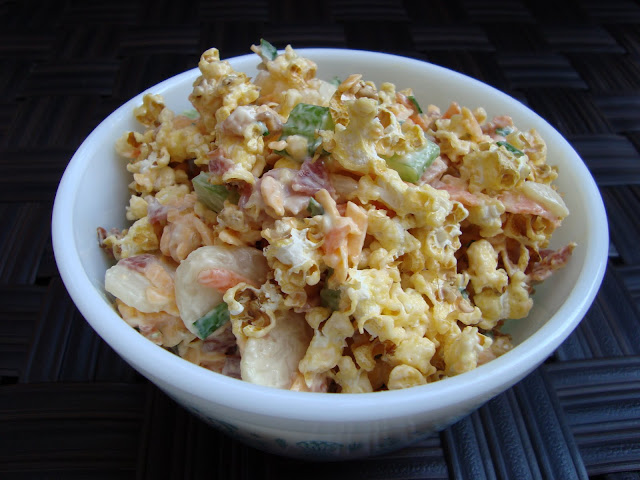 I present this dish with a side of humble (mock apple) pie.

In last week’s post for Pineapple Cream Cake, I went on and on about the brick shit houseness of caker food. And that was a gross generalization. (I mean gross as in "sweeping.") Because this week, I offer you the delicate, perishable flower that is Popcorn Salad.

Now before anyone gets all huffy and says that the words “popcorn” and “salad” should never appear side by side, let me remind you that popcorn is a whole grain.  So this salad is extremely healthy, as long as you don’t count the mayonnaise, cheese or bacon.

There’s just one problem. Popcorn wilts. If you make this salad—and I hope you do because it's delicious—eat it immediately. Otherwise, you’ll be serving a salad that appears to have bits of chewed up Kleenex in it and that won’t win you any friends.

A note about the popcorn: I kick it old school and make my popcorn on the stove. You could also use an air-popper. But I wouldn’t recommend packaged mircrowave popcorn. You could try Jiffy Pop. But if the witch shows up, don't come crying to me.

Source: The Best of Enbridge
Posted by Brian Francis at 03:46 1 comments 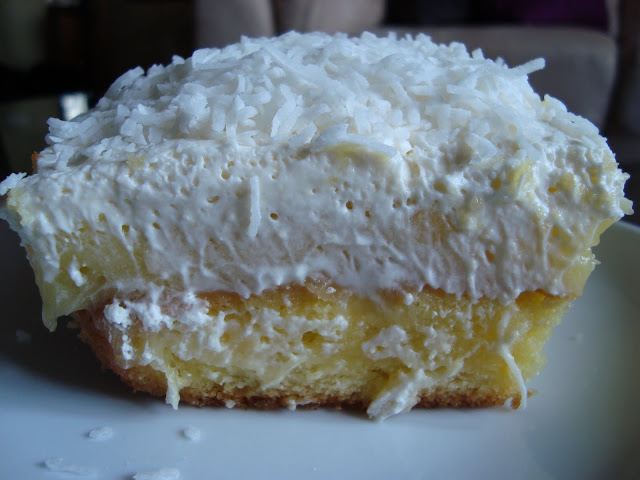 Let's be honest  – caker food is built like a brick shit house. The day after armageddon, there’ll be a cockroach nibbling on a Triscuit somewhere in the world. The longevity of caker food could have something to do with the preservatives, but I like to think it’s more survival of the fattest fittest.

I served this Pineapple Cream Cake to some caker friends last week. They rated it between a 6 and 7 out of 10. Not bad, I thought, but certainly not blog-worthy. Two nights later, I served the leftovers to my family. And in a matter of 48 hours, that cake had gone from a 7 to a 10. Everyone loved it. Two days after that, the cake had reached new heights of flavour. In fact, this pretty well sums it up.

My advice to you? Although the recipe says to let it sit for 24 hours in the fridge, leave this cake longer. Heck, let it fester for a few months like a bottle of Blue Nun. Don't worry. Caker food can take it.

In a 9" x13" pan, bake cake according to package instructions. Meanwhile, combine pineapple with its juice and sugar in medium saucepan. Cook over medium heat, stirring occasionally, until thick and syrupy, about 20 minutes. When cake is done, remove from oven and pierce top with fork at 1" intervals. Pour pineapple mixture over cake and spread evenly. Cool completely. Combine pudding mixes with milk in medium bowl. Blend until thick. Spread over cake. Beat whipping cream in medium bowl until soft peaks form. Add icing sugar and vanilla. Continue beating until stiff. Spread over cake. Refrigerate for 24 hours. (Editor's note: OR LONGER!!) Before serving, sprinkle with coconut.