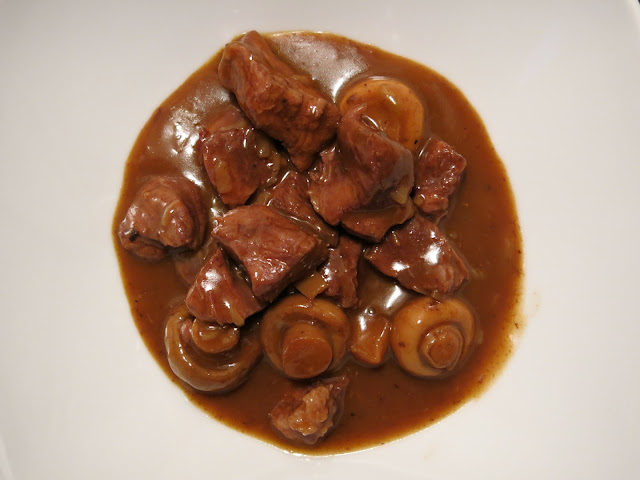 We’re into week two of my month-long Caker Cooking reader bonanza and today, we travel to Quebec!

Although I try to be inclusive, there are some provinces that are caker underrepresented on this blog, Quebec being one of them. So I was as happy as Bonhomme when reader Carolyn sent me this recipe. Carolyn’s mom used to be a visiting nurse and was given this recipe by one of her patients. It became known in Carolyn's house as "Mademoiselle Cleghorn's Stewing Beef Casserole." (Can’t you just picture the pom poms on this woman's mules?)

As an added bonus, this recipe calls for golden mushroom soup, not cream of mushroom soup. The difference between the two is that golden mushroom is made from beef stock. It isn’t as easy to find as its grey cousin, but you shouldn’t have too much trouble. Just look for the glow coming from the canned soup aisle.

Speaking of glows, Mademoiselle Cleghorn's Stewing Beef Casserole warmed me right up. Chock full of tender beef and canned mushrooms, it's perfect for those nights when all you want to do is kick up your mules and listen to Mitsou.

Note: Cakers are often named Sherry, but they rarely cook with it. If you’ve got some, great. If not, you could probably substitute with some other kind of booze. Just not Blue Curacao.