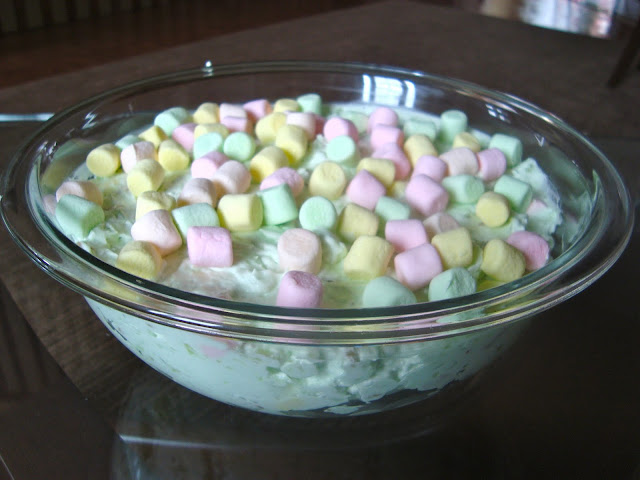 We cakers tend to use some words and phrases quite loosely; words like “nutritious," “gourmet" and "low in saturated fat."

Another example? The caker interpretation of  “salad.”

For most non-cakers, a salad usually means lettuce, carrots, maybe a radish or two. For cakers, it means Cool Whip, miniature marshmallows and JELL-O.

Take this Watergate Salad. In my family, this was reserved for Sunday meals — as a side dish. That’s right. It wasn’t dessert. It sat on the dinner table alongside the roast beef, mashed potatoes and corn.  It seems strange, I know. But as a kid, it was great. I considered it a doubling up of desserts.

If you think this salad is a little intense, just wait until you see some of the other caker salads I’ve got up my sleeve. Let’s just say you’ll never look at popcorn and Coca-Cola the same way again.

This recipe is by special request. I hope it brings back some fond memories of dinner at your Grandma’s house, Jamie.

In large bowl, mix pineapple, pudding, marshmallows and walnuts or coconut. Fold in whipped topping and refrigerate at least 3 hours.

Pastel green, pillowy and studded with bits o' nuts, this Watergate will make you salivate.

UPDATE: A fellow caker made this and told me it turned out "soupy." The reason? He made the pistachio pudding according the box directions and then added it. Folks, don't do that. Just dump the mix in with all the other ingredients. That's what caker cooking is all about.